Reliable, affordable solution for your pharmacy 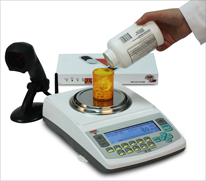 Just because you’re looking for the perfect tablet counter, doesn’t mean you have to sacrifice dependability just to stay on budget. From its scalable design to its ability to satisfy pill counting needs of highest magnitude, the DRX-500SX system provides a strong foundation for your pharmacy to grow and build an affordable automation solution right out of the box. DRX-500SX System...

The DRX-5SX systems software is preinstalled on an all solid-state embedded computer (the Torbal Rx Server). The system is designed to allow multiple DRX–500s pill counting scales to function in a network environment, in either a WiFi wireless or an Ethernet wired configuration. Also preinstalled on the server is the National Drug Code Directory database. This device allows multiple users to generate and store a central database of drug average pill weights (APW) which are shared by all the scales connected to the system. It additionally, and very significantly, furnishes the system and users with a new tool for updating the average piece weight database rapidly and accurately, without the need for manual sample counting. This new feature, called advanced pill counting accuracy (APA), brings counting pills by weight up to the highest standards, and competes favorably for the fastest technique.

The server controls the pill counting stations and tracks all pill counting transactions, as well as, user activity. The server can send the scale detailed information about the medication being counted. The server is designed to handle networks of up to 30 scales. The scales can be connected directly to the server (plug and play), or through a hub, or a switch, on your existing local area network, or remotely over the Internet. The scales can also be connected in a WiFi configuration which also allows for simple plug and play setup.

The system provides an interactive administrative panel that may be accessed through any PC web browser on the network, such as Internet Explorer or Mozilla Firefox. This function provides the user with pre-formatted charts and graphs of user transaction data. It also allows the system administrator to set up users and configure the server. The administrator can configure the system for high security, or loosely (for easy access). The administrator can monitor single workstations or look at overall system performance. There are seven different reports that can be generated. The reports can be printed in a printer friendly format or exported to a spreadsheet in a .csv format. Reports can be generated on failed transactions (miscounts or drug verification), or on most frequently used drugs in the pharmacy.

The system can also generate instant e-mail alerts in the event of miscounts or failed verification attempts. It can also generate automatic e-mail reports relating to transaction data. The reports can be daily, weekly, monthly, and quarterly. Reports can include detailed data about performed counting transactions, verifications, most frequently counted drugs, as well as, detailed user activity.

The server uses the National Drug Code Directory database to provide scales with the detailed drug information, such as name, strength, dosage form, and manufacturer. Revised NDC Directories can be quickly uploaded to the server through the Administrative Panel.

The server can be set to automatically remind the user to perform an update (user sets the period) of a drugs average piece weight as part of a regular script filling pill counting transaction. The update feature incorporates the advanced pill counting accuracy (APA) algorithm, which eliminates the need to manually count out a sample. To update the APW, the user is asked to briefly pause counting in the range of 10 to 15 pieces, and again anywhere in the range of 20 to 30 pieces. This process adds only approximately 4 seconds to the counting transaction and automatically recalculate its updates the drug on the server. Most commonly used drugs should be updated every 60 to 90 days.

Filling a regular script with this system is a simple process. If we take a typical pill counting transaction of 60 pills it requires three simple steps, and can be performed in less than 20 seconds. The steps are: tare the vial, scan the NDC code located on the supply bottle, and fill the count. During the count the scale displays the name of the drug and other important drug information. The details of each transaction are logged by the server. The system will also provide RX verification at the user's option. This option requires that a second label be scanned (on the script label package) for comparison with the supply bottle NDC code. This system provides advanced pill counting stations, at an economical price, that rival robotics in their capability.